Day Iyaloja of Lagos held rally for Tinubu, Sanwo-Olu, others


The Iyaloja of Lagos, Bintu Fatima Tinubu, has held a Solidarity Walk in support of the All Progressives Congress (APC) Presidential Candidate, Asiwaju Bola Ahmed Tinubu and his running mate, Senator Kashim Shettima.

The solidarity walk was also to support Governor Babajide Sanwo-Olu, his deputy, and other party candidates in the forthcoming election. 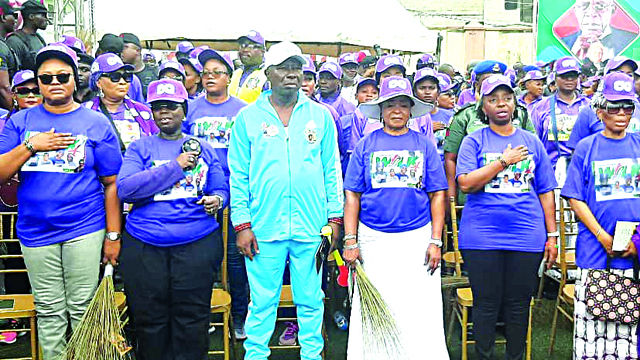 Over 10,000 people participated in the walk, which started from Tinubu Square and terminated at the Campus Mini Stadium, Mainland, Lagos.

The Convener, Iyaloja of Lagos, expressed confidence that the ruling APC and its presidential candidate, Tinubu will win the 2023 presidential election.

She appealed to Nigerians to come out en mass and vote for Tinubu, as “he deserves to be the next president of Nigeria.”

She said: “We are here because of our son, Asiwaju Bola Ahmed Tinubu. We want him to be president of this country. He has done a lot and he deserves it. That is why we are all here to canvass. Honour your civic duty and vote for APC candidates in the coming general elections, as that will lead Nigeria towards its destiny.

The Governor’s Wife appealed to Lagosians to get their Permanent Voter Cards (PVCs) ready and vote for all APC candidates, as elections are the cornerstone of representative governance.

She noted that Lagos is a cosmopolitan state that accommodates all irrespective of tribe or country. ”We have Yoruba, Hausa Igbo, Ijaw, and the Togolese among others in Lagos State. So, let’s exercise our civic right by voting for the APC Presidential Candidate and other candidates of the party.

“If you have stayed in Nigeria for so long like 10 to 20 years that means you are entitled to have PVC. Your vote counts as a citizen, it is your right. You don’t need to be paid before you go out and vote. Protect your life and the life of your children and grandchildren.”

While noting that it is an honour that the next APC presidential candidate is coming from Lagos State, she advised the youths to secure their right by voting for APC. “Looking at the registration, we discovered that the number of youths that registered for PVC is high. We appealed to you to make us proud by voting for the right candidate.”

Former Deputy Governor and APC Lagos West Senatorial Candidate, Dr. Adebule commended the convener of the rally for bringing the party together to celebrate Asiwaju Tinubu and his running mate, Senator Shettima.

She assured that Asiwaju is committed to good governance, and would provide enabling environment for people to develop themselves. “APC Presidential candidate and Lagos State Governor are committed to the development of the country and state.”