NASA called off a test flight on Monday of its largest-ever rocket in a setback to the ambitious program to send humans back to the Moon and eventually to Mars.

“This is a very complicated machine,” Nelson said. “You don’t want to light the candle until it’s ready to go.”

Alternative dates for the launch of the US space agency’s uncrewed Artemis 1 mission are Friday and next Monday.

A poster showing the Orion capsule for the Artemis II mission is displayed inside the Operations and Checkout Building (O&C) at the Kennedy Space Center in Cape Canaveral, Florida, on August 28, 2022. – Fifty years after the last Apollo mission, the Artemis program is poised to take up the baton of lunar exploration with a test launch on August 29 of NASA’s most powerful rocket ever. It will propel the Orion crew capsule into orbit around the Moon. The spacecraft will remain in space for 42 days before returning to Earth. (Photo by CHANDAN KHANNA / AFP)

Blastoff had been planned for 8:33 am (1233 GMT) but was cancelled because of a temperature problem with one of the four RS-25 engines on the 322-foot (98-meter) Space Launch System (SLS) rocket.

NASA said a test to get one of the engines to the proper temperature range for liftoff was not successful.

It said the SLS rocket and Orion crew capsule which sits on top “remain in a safe and stable configuration.”

Nelson said delays were “just part of the space business” and expressed confidence that NASA engineers will “get it fixed and then we’ll fly.” 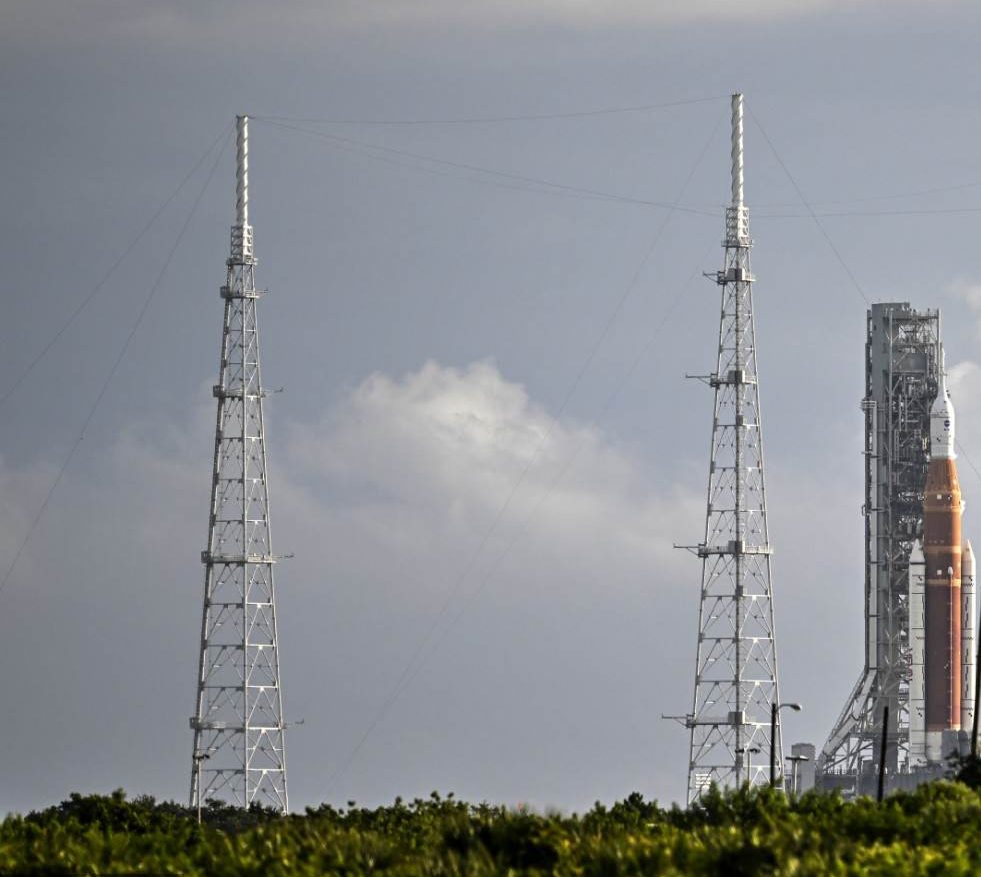 The Artemis I unmanned lunar rocket sits on the launch pad at the Kennedy Space Center in Cape Canaveral, Florida, on August 29, 2022. – NASA called off the test flight on Monday of its largest-ever Moon rocket because of a temperature issue with one of the four giant engines. (Photo by CHANDAN KHANNA / AFP)

Tens of thousands of people — including US Vice President Kamala Harris — had gathered near the Kennedy Space Center in Florida to watch the launch, which comes 50 years after Apollo 17 astronauts last set foot on the Moon.

The goal of the flight is to test the SLS and Orion crew capsule. Mannequins equipped with sensors are standing in for a crew for the mission.

Overnight operations to fill the orange-and-white rocket with more than three million liters of ultra-cold liquid hydrogen and oxygen were briefly delayed by a high risk of lightning.

Around 3:00 am, another hiccup emerged: a potential leak was detected during the filling of the main stage with hydrogen, causing a pause. After tests, the flow resumed.

NASA engineers later detected the engine temperature problem and put a hold on the countdown before eventually scrubbing the launch.

The rocket’s Orion capsule is to orbit the Moon to see if the vessel is safe for people in the near future. At some point, Artemis aims to put a woman and a person of color on the Moon for the first time.

– Extreme temperatures –
During the 42-day trip, the Orion capsule will orbit the Moon, coming within 60 miles (100 kilometers) at its closest approach, and then fire its engines to shoot out 40,000 miles — a record for a spacecraft rated to carry humans.

One of the mission’s primary objectives is to test the capsule’s heat shield, which at 16 feet in diameter is the largest ever built.

On its return to Earth’s atmosphere, the heat shield will have to withstand speeds of 25,000 miles per hour and a temperature of 5,000 degrees Fahrenheit (2,760 degrees Celsius) — roughly half as hot as the Sun.

The dummies aboard the spacecraft will record acceleration, vibration, and radiation levels.

The craft will also deploy small satellites to study the lunar surface.

A complete failure would be devastating for a program costing $4.1 billion per launch that is already years behind schedule.

– Life on the Moon –
The next mission, Artemis 2, will take astronauts into orbit around the Moon without landing on its surface. The crew of Artemis 3 is to land on the Moon in 2025 at the earliest.

And since humans have already visited the Moon, Artemis has its sights set on another lofty goal: a crewed mission to Mars.

The Artemis program is to establish a lasting human presence on the Moon with an orbiting space station known as Gateway and a base on the surface.

Gateway would serve as a staging and refueling station for a voyage to Mars that would take a minimum of several months.