Is now the time to buy gold?


Gold is often touted as an inflation hedge, however, its price in US Dollars was down by as much as 12% in 2022. We’ll touch on why gold has underperformed in absolute terms, and ask where its price is headed in the months ahead.

It’s become apparent that gold is an inflation hedge only until central banks start tightening monetary policy. In 2022, central banks across developed and emerging markets embarked on the fastest round of monetary policy tightening in modern history. And in the US, the Federal Reserve raised its interest rate from 0% in March to between 3.75% and 4.25% by November 3rd.

As investors sought safety and cash returns in US Dollars, the US Dollar outperformed all other currencies. The US Dollar Currency Index, which measures the performance of the US Dollar against a basket of other major currencies, rose almost 19% from 97 at the start of the year, to a high of 115 by September-end.

The strength in the US Dollar matters because it is more often than not negatively correlated with the price of gold. As investors pile into the Dollar, their demand for other assets, including gold, falls.

However, the US Dollar Currency Index has failed to make a new high since the end of September. As is apparent from the following chart, it’s been in a downward channel, making lower highs and lower lows. 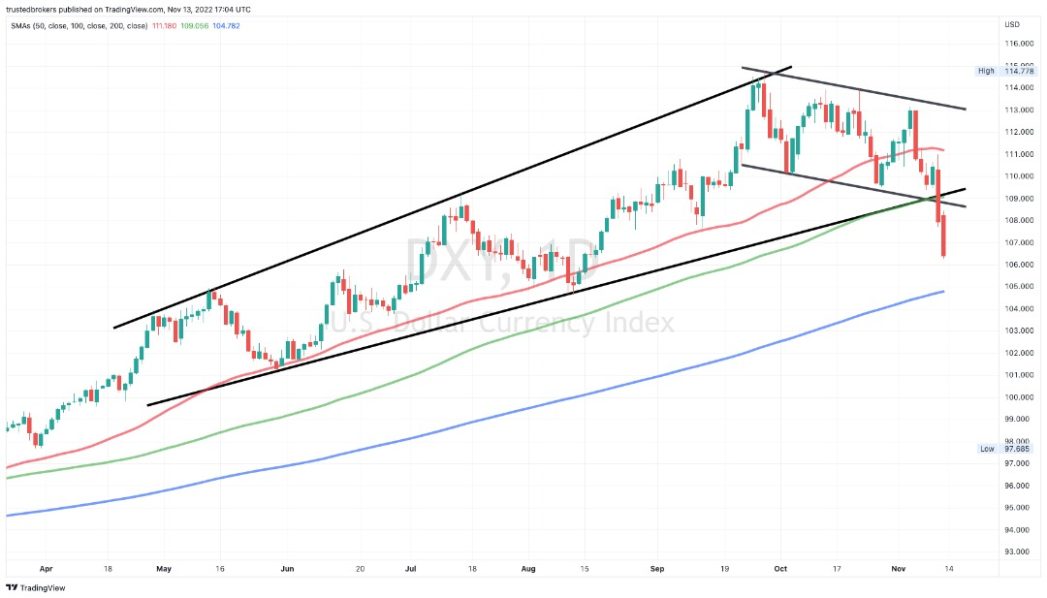 In fact, it broke down below its lower channel towards the start of November, as a lower than expected inflation-print in the US led investors to scale back their expectations of future rate hikes. Instead, they turned to “anything but the Dollar”, prompting a $150 increase in the price of gold in the first 2 weeks of November. Kathie Wood’s speculative ARK Innovation ETF also enjoyed one of its best daily returns ever.

This illustrates why interest rate expectations and differentials between the US and the rest of the world are key, when it comes to understanding changes in the price of gold.

If gold is in a new uptrend, you could invest in gold mining stocks to gain even more upside, as gold mining stocks tend to rise more than the price of gold itself. This is because gold miners have fixed costs (in the form of labour for example), which causes a rise in their revenue to deliver an even greater rise in their earnings per share. Growth in earnings per share drives growth in their price share, all else equal.

You could invest in gold miners individually, or turn to an ETF for simplicity and risk diversification. The GDX ETF captures the largest gold miners, whereas the GDXJ captures junior gold miners. Junior gold mining stocks are more speculative investments because they tend to have early stage exploration projects, with cash flows further out into the future.

As is apparent from the following chart, gold mining stocks as measured by the GDX are cheap in absolute terms. By the start of November 2022, they were trading in line with levels last seen in 2017 and 2019. They also remain well below their 2011 highs when the GDX hit a $61 high, at a time when investors were concerned about inflation. 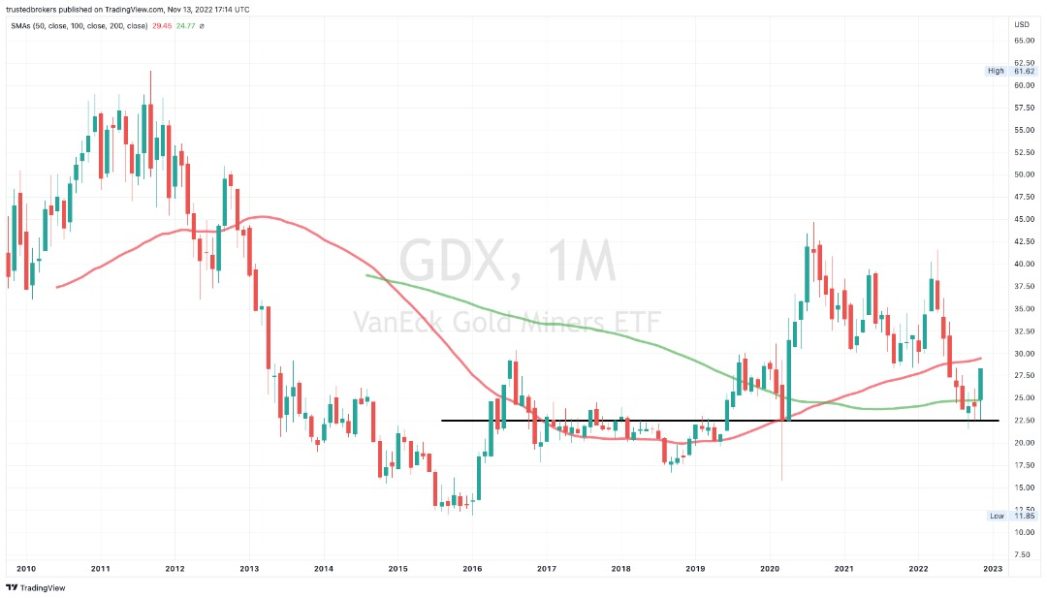 If you’d like to trade the price of gold, or the Dollar against other majors, open an account with a regulated online broker. If you’re unsure about where to start, why not download AvaTrade’s MT4 platform. AvaTrade is overseen by 8 regulators, including those in the EU, the UK and South Africa. It’s MT4 platform is free to download and allows you to trade hundreds of instruments in one place from a low initial deposit. 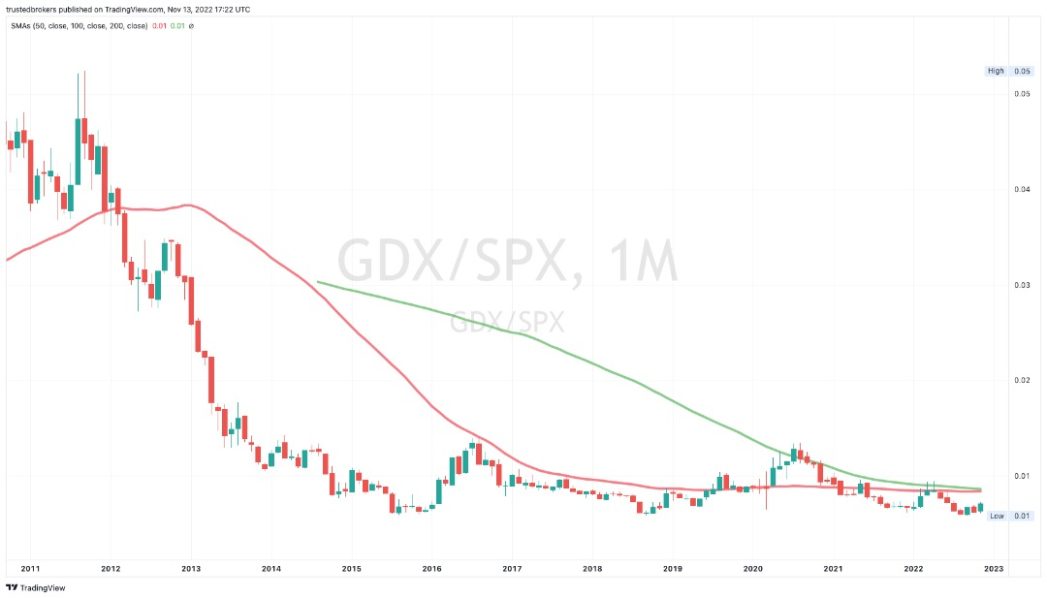 Importantly, past performance isn’t a predictor of future returns; and relative performance is no predictor of absolute returns either. For example, the GDX could outperform the S&P simply by falling less than the S&P in absolute terms. That’s why you should always invest with caution, and never invest more than you can afford to lose.

Interest rate differentials between the US and other leading economies, like the Eurozone and the UK, are likely to shape the future course of the Dollar, and the price of gold.

If the US economy slows faster than expected, the price of gold could rise as investors start to price-in interest rate cuts, and the Dollar falls. Investors often seek safety in gold when stocks fall.

However, a more resilient US economy and stickier than expected inflation prints could prompt investors to move back into Dollars if they expect interest rates to remain higher for longer. This is the message that Jerome Powell and other FOMC board members have been communicating outwards.

As the Federal Reserve has pledged to be data-dependent, inflation and unemployment numbers in the US in the coming months will be critical to understanding where the price of gold will go in 2023.

TikTok Is For 13+; TikTok Safety Measures