As the British Royal family prepares to finally rest the monarch, Queen Elizabeth II, exactly a week from today, the world continues to mourn and rue the absence of a generational ruler who will be remembered for, among others, being a lifelong face of core British tradition.

Queen Elizabeth II joined her ancestors four days ago on September 8, 2022, peacefully at her Balmoral estate in Scotland at the age of 96.

The State Funeral of Her Majesty will take place at Westminster Abbey on Monday, September 19, at 11:00 a.m. 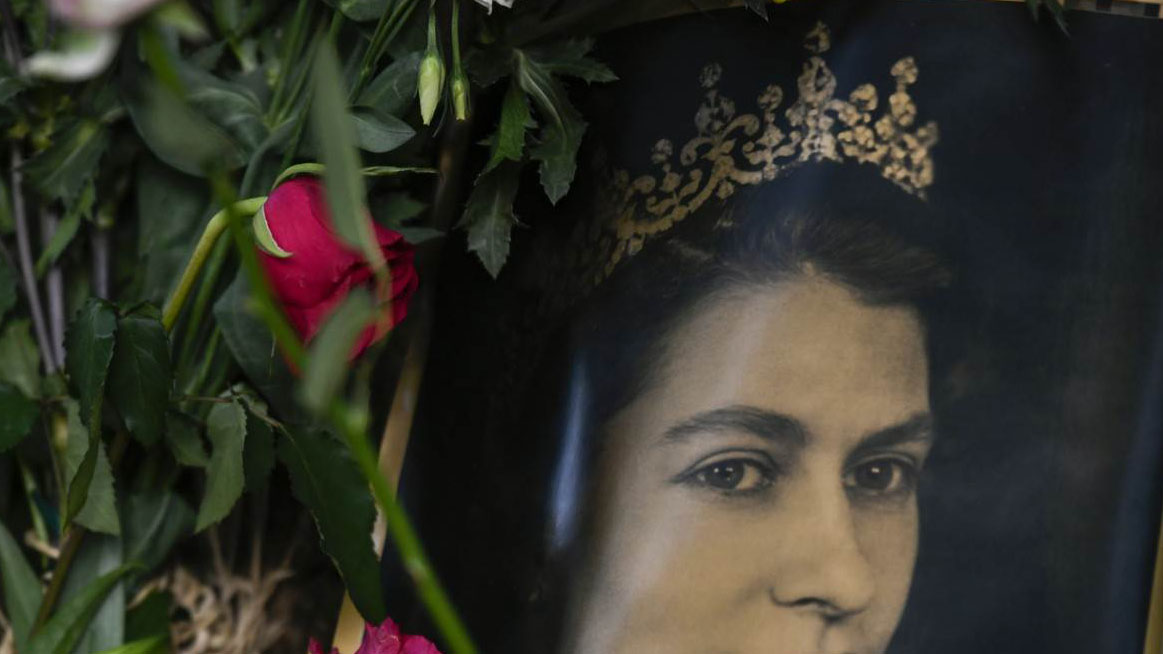 A portrait of Britain’s Queen Elizabeth II is seen next to flowers placed outside of Buckingham Palace in London on September 11, 2022. – Queen Elizabeth II’s coffin will travel by road through Scottish towns and villages on Sunday as it begins its final journey from her beloved Scottish retreat of Balmoral. The Queen, who died on September 8, will be taken to the Palace of Holyroodhouse before lying at rest in St Giles’ Cathedral, before travelling onwards to London for her funeral. (Photo by STEPHANE DE SAKUTIN / AFP)

Prior to the funeral, the Queen will lie-in-state in Westminster Hall for four days, to allow the public to pay their respects, according to the Royal Family’s announcement on Saturday. The Queen’s coffin currently rests in the Ballroom at Balmoral Castle.

Born as Princess Elizabeth Alexandra Mary on April 21, 1926, to Prince Albert, Duke of York (later known as King George VI) and Elizabeth Bowes-Lyon, the late Queen was the longest-reigning monarch in British history and celebrated 70 years on the throne in June 2022 with her Platinum Jubilee in a blaze of glory.

She became queen on February 6, 1952, and was crowned on June 2, 1953. She was the mother of Prince Charles who has now succeeded her as King Charles III; Princess Anne, and Princes Andrew and Edward. Her grandchildren include Princes William and Harry. Her reign was modernised based on the changing dynamics of the global order. Thus, she was sensitive to a changing world while keeping up with traditions associated with the crown.

The passing of the Queen has predictably attracted a global reaction. As William Shakespeare would have intoned, when beggars die there are no comets seen; the heaven themselves blaze forth the death of princes. 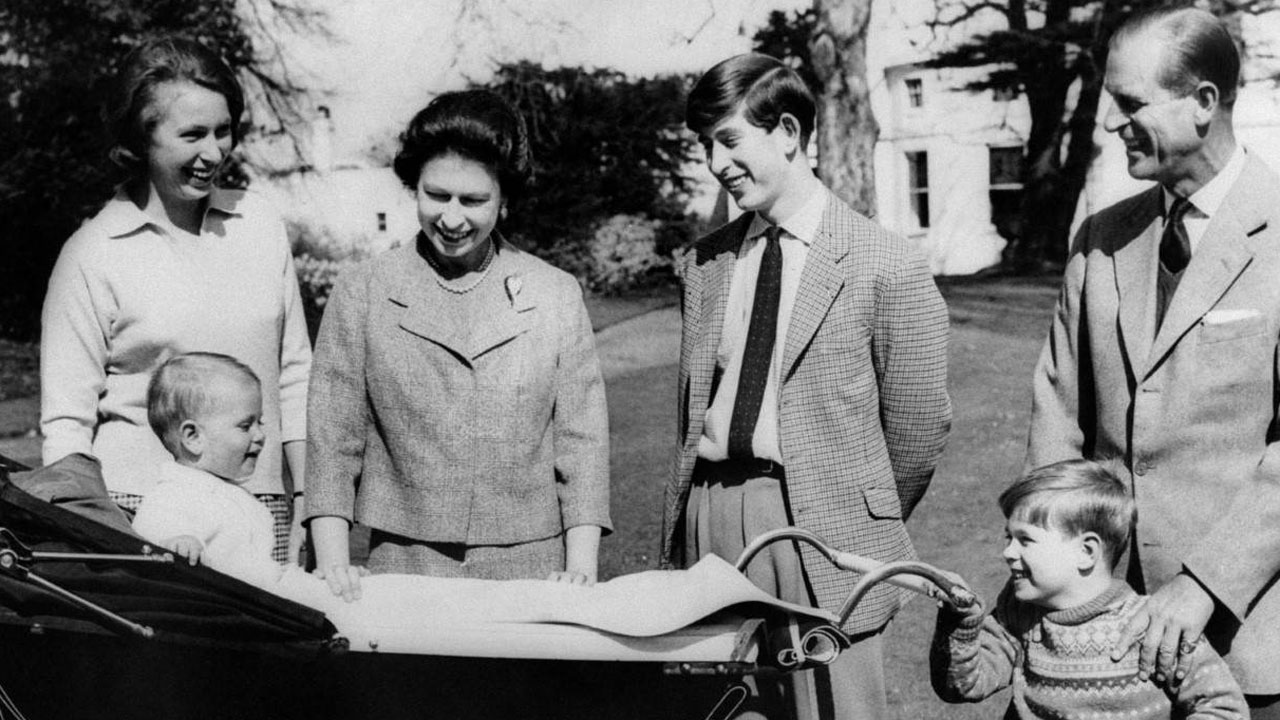 (FILES) In this file photo taken on April 21, 1965 at Frogmore House in Windsor, Berkshire shows The British Royal Family: (from L to R) Princess Anne, Britain’s Queen Elizabeth II, Prince Charles, Prince of Wales, Prince Philip, Duke of Edinburgh, Prince Andrew, Duke of York smiling at Prince Edward, Earl of Wessex, in his cradle. – Queen Elizabeth II, the longest-serving monarch in British history and an icon instantly recognisable to billions of people around the world, has died aged 96, Buckingham Palace said on September 8, 2022. Her eldest son, Charles, 73, succeeds as king immediately, according to centuries of protocol, beginning a new, less certain chapter for the royal family after the queen’s record-breaking 70-year reign. (Photo by STRINGER / CENTRAL PRESS / AFP)

King Charles III said the death of his beloved Mother, Her Majesty The Queen, was a moment of the greatest sadness for him and all members of his family who had to mourn profoundly the passing of a cherished Sovereign and mother. He noted her passing would be deeply felt across the length and breadth of Britain, including the Realms and the Commonwealth.

For the incumbent Prime Minister of Britain, Liz Truss, the Queen was the rock on which modern Britain was built, and the country has grown and flourished under her reign. She noted that the country attained its status today due to her resilience. She did not only provide stability but also the strength that the country needed. “She was the very spirit of Great Britain — and that spirit will endure.

U.S. President Joe Biden and First Lady Jill Biden in eulogizing her said that the queen was more than a monarch. She was one who defined an era, especially a constantly changing global order in which she acted as a stabilising factor with her “steadying presence and a source of comfort and pride for generations of Britons, including many who have never known their country without her.”

It was not unusual that condolences also came from rival powers like Russia and China, despite their divergent views with Britain on the Russia-Ukraine war. 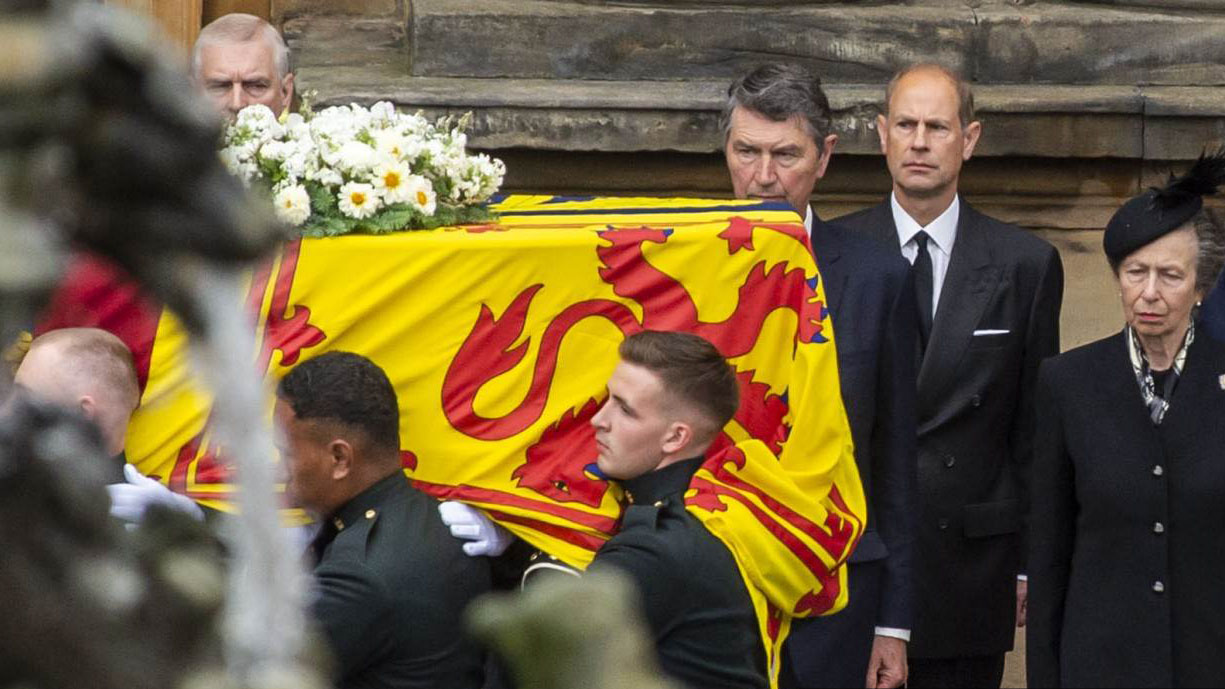 Britain’s Prince Andrew, Duke of York (L), Vice Admiral Timothy Laurence (C), Britain’s Prince Edward, Earl of Wessex (3R) and Britain’s Princess Anne, Princess Royal stand as the coffin of Queen Elizabeth II, draped with the Royal Standard of Scotland, is carried into the Palace of Holyroodhouse, in Edinburgh on September 11, 2022. – The coffin carrying the body of Queen Elizabeth II left her beloved Balmoral Castle on Sunday, beginning a six-hour journey to the Scottish capital of Edinburgh. (Photo by Lisa Ferguson / POOL / AFP)

In a message to King Charles III, Britain’s new king, Vladimir Putin wished King Charles III the courage and resilience to bear the irreparable loss, and noted further that the queen “rightfully enjoyed the love and respect of her subjects, as well as an authority on the world stage.”

President Xi Jinping expressed deep condolences to the British royal family, government and people on the passing of Queen Elizabeth II. He noted that the queen’s passing was a great loss to the British people while looking forward to strengthening bilateral relations with the UK.

On his part, President Muhammadu Buhari said he received with immense shock the passing of the queen. He noted that her majesty was known to 90 per cent of the Nigerian population due to her longevity on the throne.

Besides, the story of modern Nigeria would be incomplete without a chapter on Queen Elizabeth II who was a global and outstanding leader in her dedication to her country, the commonwealth and the world. The president ended his message with the hope of continuing bilateral relations with Britain. 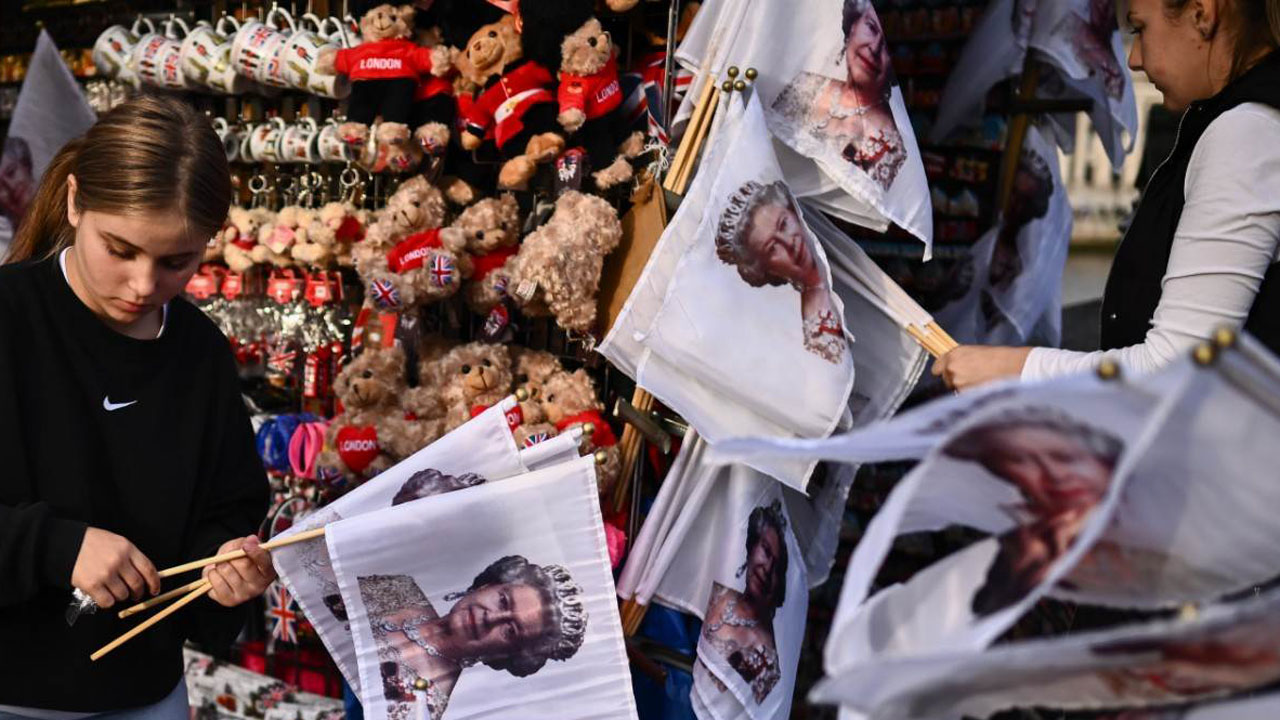 A customer holds flags with the portrait of Britain’s Queen Elizabeth II on at a vendor’s stall in London on September 11, 2022. – Queen Elizabeth II’s coffin will travel by road through Scottish towns and villages on Sunday as it begins its final journey from her beloved Scottish retreat of Balmoral. The Queen, who died on September 8, will be taken to the Palace of Holyroodhouse before lying at rest in St Giles’ Cathedral, before travelling onwards to London for her funeral. (Photo by Marco BERTORELLO / AFP)

Queen Elizabeth’s reign of 70 years witnessed momentous global events. Before ascension to the throne, she witnessed World War II and as a little girl broadcast a message of hope to fellow British children.

During the war, Elizabeth joined the Auxiliary Territorial Service to help in the war effort.

She trained alongside other British women to be an expert driver and mechanic. It was in her era that the wind of change blew through the empire and ended most of the British colonial possession. However, during the 1950s and 1960s, many of these possessions achieved independence and evolved into the Commonwealth of Nations.

It should be noted, however, that the ‘wind of change’ that saw the empire sunset was provoked by the dynamics of World War 11 and its aftermath to the extent that colonised people sought freedom from British imperialism. Consequently, many African countries gained their independence by dint of struggle to be free.

Ghana, Nigeria, and Uganda, among others, became free independent nations with colonial baggage of externally oriented economies in which they produced what they do not consume and imported what they do not produce, a scourge which to this day has continued to burden the continent.

Artificially cobbled nations, such as Nigeria, have continued to suffer from a lack of national unity and a consequent development drawback. It is historically significant to note that the Queen was recalcitrant to the independence of Zimbabwe and South Africa; a position that forced Nigeria to nationalise British assets under the Olusegun Obasanjo military Junta.

However, the Queen would be remembered for managing the image of her country and for accepting the multi-cultured society that Britain has become as a consequence of her colonial exploits that have seen the erstwhile colonial people taking Britain as their metropolitan haven.

As some observers have noted, as a constitutional monarch, Elizabeth did not meddle in political matters; she held her views close to her heart while maintaining a steady liaison with her prime ministers.

The way we are

The united fight against China wildfire